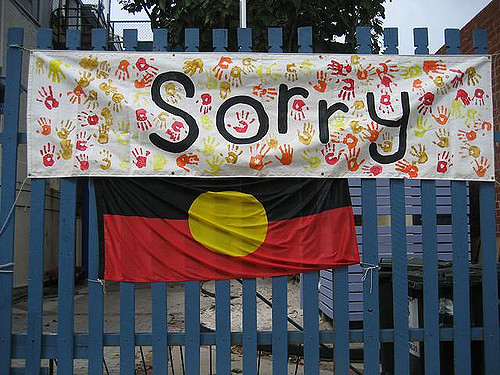 Were the original settlers sorry too?

Now that Fremantle has decided to dress up a budget cut in Politically Correct language and claim it is doing everyone a favour, Dodgy Perth needs to ask the question no one else is asking. What on earth did the original white colonists of Western Australia think they were doing?

Firstly, should it be called Australia Day or Invasion Day? Perhaps surprisingly, James Stirling would have agreed with the latter:

Their country has been taken from them by force… No sophistry can conceal the fact that Western Australia is a conquered Nation… We have taken the country from the rightful possessors of the soil, and must abide by the consequences of that first act of aggression…

And some of the earliest colonists agreed with Stirling, claiming they didn’t know they were about to steal land when they turned up here:

Which of us can say that he first made a rational calculation of the rights of the owners of the soil, of the contemplated violation of those rights, of the probable consequences of that violation, or of our justification for such an act?

Yet the colonists did take the land, even though they felt really, really guilty about it. And when people feel guilty about something (with no intention of putting things right) they have to offer a justification to themselves about why it’s okay really. Two defences of invasion were most common: the nice white folk were offering British citizenship to the Aborigines and they were also offered all the advantages of early 19th century technology, like bread and blankets.

However strange it might seem, the traditional owners didn’t seem very grateful for this forced swap of property for becoming subjects of an overseas’ king:

As a boon to the poor Natives for the loss of their land and their hunting and fishing grounds they made them British subjects! The Native says “Of what benefit is that boon of grace to me?”

Nor did the local Aborigines feel that handouts of bread was fair recompense for being evicted from their homeland. In prophetic words, one critic of the invasion said of such trade: “the benefit, if any at all, is only temporary, the injury inflicted is permanent”.

Here in the Dodgy Perth offices, we don’t really care if Fremantle has fireworks or not. But if they think it’s really going to work towards reconciliation and reparation they may as well be handing out bread, blankets, and British citizenship for all the good it will do.