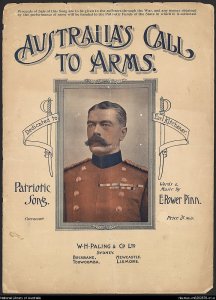 When Guy Sebastian, Shannon Noll and Jessica Mauboy team up with others to record a modern-day patriotic song, you know it’s going to be awful. And boy does it suck. Big time.

We challenge you to get halfway before scrambling for the stop button.

So Dodgy Perth thought it was time to take a look back at Perth’s best known patriotic composer of WWI, who went by the fabulous name of Elizabeth Power Pinn.

On her delicate shoulders fell the responsibility of churning out poems and songs which would cheer the troops, remind people at home of their duty, and generally assist the war effort.

It is an inviolable rule, though, that there are only two types of poet utterly convinced of their own talent: geniuses and the talentless.

Her biggest hit song was Australia’s Call to Arms, of which the opening verse went:

We’re the worthy sons of Britain,
The Nation of the world!
We’re going to hold the banner,
No matter where it’s hurled.
Of ev’ry page of his’try,
We’re going to paint the red;
And conquer foes as in the past,
When Drake and Nelson led.

On Friday nights, His Majesty’s Theatre would put on a variety show hosted by The Dandies. One of its stars was Linda Bradford, who was variously reviewed as a ‘gem’ and ‘she sings to the soul’.

Well, in January 1915, Linda made the mistake of singing one of Mrs Power Pinn’s latest jingoistic offerings: Flag of Liberty.

She did the best she could. But nothing could cover up the fact that the thing was god-awful.

The Sunday Times reviewer noted that while the words were bad, the tune was worse.

His sensible advice to The Dandies was to keep a gun handy for the next patriotic songwriter who offered “untuneful hogwash”. And to use it.

He kept a whole armory to stop jingoist writers himself, as well as mining the door to the office.

If only Guy, Shannon and Jessica had been given such advice, we would have been spared their instantly forgettable piece of blandness.

But to cheer up the Dodgy Perth readership convinced that songs can’t support your nation and be good, we offer the only decent jingoistic melody (slightly NSFW) ever written: