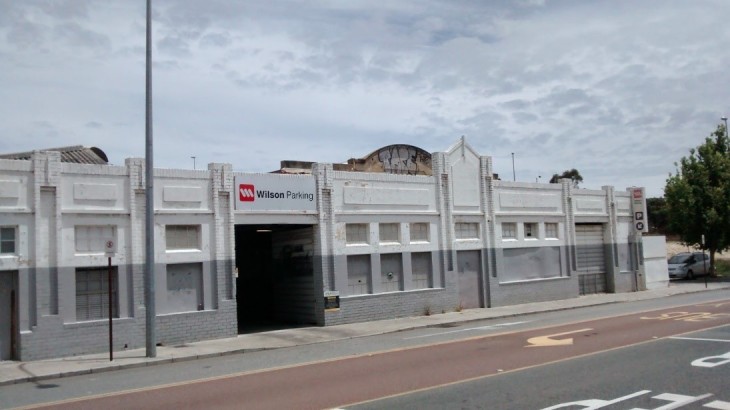 A place to find escorts?

Dodgy Perth recommends taking a stroll to the west end of James Street. The frontage of the Wilson Car Park conceals a secret. A secret about courtesans. Which are the best kind of secrets.

If you look carefully above the car park, there is an Art Deco building hidden behind the modern façade. Coming through the entrance, much of the older erection can still be seen. The signage proudly proclaims that it belonged to Martin Nixon, manufacturer of bodies.

Dodgy Perth is not interested in Martin right now. Although this particular body builder will appeal to the kind of bearded man interested in old buses and trucks, and a few of his vehicles still exist here and there, mostly in museums.

But Martin only purchased the ‘Modern Service Station’. The original had been erected to serve the rather different needs of Princess Josie de Bray in 1930. Which still involved bodies, however.

Service was definitely what you got

Josie was Perth’s most prominent madam in the 1920s and ’30s. This James Street garage would not only offer your car a full service, it also provided a secret entrance into Josie’s back passage. That is, to her fabulous purpose-built brothel on Roe Street.

“Just going to fill her up,” would have been an expression on the lips of more than one Perth bloke.

So, next time you’re in James Street, have a look at the last remaining evidence of Perth’s famous red light district. And don’t forget to get a full service while you’re at it.

So how do you imagine the inside of a 1920s brothel on Roe Street?

Fortunately, we don’t have to guess, because Paul Hasluck once accompanied the police on their rounds and described the interiors:

Beyond the door we walked down a passageway to a sitting-room—very like the sitting-room of a Methodist parsonage with a green baize tablecloth on a dining-table with a lace doily in the centre and a vase of listless leaves and china ornaments of shepherdesses and dogs on the mantelpiece. In one of the smaller places, obviously not a Methodist, there was a cheap coloured print of the Madonna with uplifted face.

One empty bedroom shown to us was very much like the sort of bedroom the spinster sister of the Methodist minister might have slept in by herself, with a bass bedstead, a white quilt with tassels, and a china toilet set in the willow pattern.

Apparently Josie Villa was a little livelier, with brighter lights, bolder pictures and a piano. The girls there were more animated with thinner dresses, and tidier hair and makeup compared to the other brothels on the Rue de Roe.

The above quotation comes from the incomparable Selling Sex by Raelene Frances. The complete guide to everything you ever wanted to know about the history of prostitution in Australia but were afraid to ask.

I know I promised to move on to Audrey and her amazing eyes, but since I needed to write up Josie’s story today, I thought I’d offer it here for general consumption.

Regular readers will have seen most of the details before, but there are (hopefully) a couple of added twists.

What a story. What a dame. She was a peroxide blonde, French beauty who dominated Perth’s prostitution business for decades. She held wild, wild parties, was shot in the middle of the night, captured by Nazis, and owned a chain of service stations, one of which was the secret entrance to her Hooker HQ.

Ladies and gentlemen, I present Princess Josie De Bray. Widely thought to be the first peroxide blonde Perth had ever seen.

Of course, she wasn’t really a princess. Except to those men who whispered her name in the Weld Club or in the Officer’s Mess. Nor was she even Josie De Bray, although that was the only name people knew her by. She was, in fact, Marie-Louise Monnier, from the small French Town of St Nazaire. But we’ll call her Josie.

Josie started working in the goldfields during the boom years. She probably started off as a working girl herself, but it wasn’t to remain that way for long.

END_OF_DOCUMENT_TOKEN_TO_BE_REPLACED 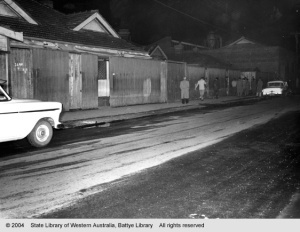 The red light area on Roe Street, shortly before the brothels were closed (image 1958).

Josie Villa wasn’t always at 222 Roe Street. Just after the Great War, it was located closer to town at number 98 on the same street.

It was at this location that Josie De Bray was wounded in a shooting, possibly carried out by drunk soldiers.

In August 1919, at 3.30am, a car was driven along the red light district, with the occupants demanding admission to the houses there.

At this time of night, the only occupants of Josie Villa were Josie herself and Esther Miller. They had just eaten a late supper, and were preparing to retire to their rooms, when they heard the car pull up outside the house.

Footsteps were heard on the front verandah, and a rap on the door followed. Although Esther said she would answer, Josie was ahead of her. She approached the front door and asked who was outside.

One of the men demanded admission, but Josie replied that no one would be admitted at that time of day. Looked through the peephole in the door she saw some of the visitors were wearing military uniforms.

The men repeated their demand, but Josie again refused them admission. They clearly became agitated and started shouting.

Suddenly two shots rang through the house. A revolver had been placed close to the peephole and fired into the passageway.

At the first shot, Josie felt a stinging pain on her left elbow. The second bullet missed her, sped through the length of the passage, leaving a hole in the wall at the end.

If Josie had not, by sheer chance, stepped aside from the peephole at the right moment, she could easily have been killed.

After firing the shots, the men fled the scene.

Josie managed to get to the rear of the house, leaving a trail of blood along the way. A doctor was summoned, and she was carried to a nearby private hospital on St George’s Terrace. 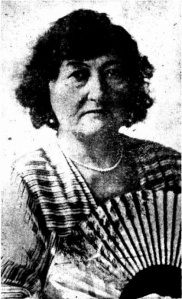 It is not easy to square the post war picture of Mme Marie-Louise Monnier with the pre-war image of her as a strikingly colourful peroxide blonde princess. But being held in a concentration camp might well make you a different person.

Undoubtedly, she came from a good French family. She had received a good education, and had contacts in France which suggested her family moved in the best circles.

She was pretty in her younger days, but grew very plump with increasing age. Her clothes came from Australia’s most exclusive stores. Her money was good, even if her profession wasn’t. And she spent a small fortune on furs while travelling in a smart car with her own chauffeur.

Her striking blonde hair was said to be a matter of her own taste, not necessarily a preference of gentlemen. In fact she was probably the first peroxide blonde in Perth.

At 137 Joel Terrace, Princess Josie had an exclusive home with a river frontage. Neighbours turned an appraising eye as hundreds of pounds worth of expensive furniture went into the house, gazed with intrigued interest at the blonde, middle-aged, expensively dressed lady who followed it in.

But excitement simmered when whispers carried the name ‘Josie’—whispers that became almost a bellow of protest as some of the girls from Roe Street began to visit the house on social calls.

After Josie went overseas, the house was left in charge of one of her friends, who was tipped off by the police not to allow any of the girls from Roe Street to come there.

It was subsequently leased to a lady with several daughters. She exited hastily as soon as she learned the identity of its owner. 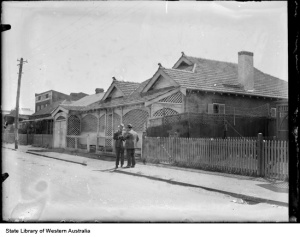 Wherever men get together, whether in the curse-charged ribaldry of an army camp or in the deep chairs of some of our most exclusive clubs, the topic often switches to Josie.

On All Hallow’s Eve we presented the secret backside of Josie Villa. Today we expose the front of 222 Roe Street, now sadly demolished to make way for tedious commercial buildings.

In our opinion, ‘Princess’ Josie De Bray deserves to be one of the most famous residents Perth has ever had. But her story appears little known.

Her profession was the world’s oldest. But she was the undisputed leader of that profession in Western Australia.

In the boom days on the Goldfields, Josie—real name Mme Marie-Louise Monnier—operated houses of ill repute on Hay Street, Kalgoorlie. Her friends in those days included some of the biggest in the mining world.

In Perth she acquired houses in Roe Street. For years she ran her various establishments herself, with the same efficiency as any modern businesswoman. To her it was simply a (profitable) business.

Josie bought and lived in a big house in Mt. Lawley, 137 Joel Terrace, which fortunately still stands and deserves to be recognised for its history, which was certainly controversial among the neighbours in its day.

About 1937 she went home to her birthplace, St. Nazaire, France, and was trapped there when war started.

For years no one in Perth knew if she was alive or dead. While living in St. Nazaire it was bombed again and again. Josie spent some tough years as a German prisoner of war.

Finally she sold a portion of her inheritance and returned to Perth in 1949, seeking to re-establish her empire.

Josie died in 1953, leaving her Perth properties to a niece back in France.

Her story will be told here over the next few days.

The secret entrance to Josie Villa (pictured here around 1930), the most famous residence in Roe Street, or the Rue de Roe as it was known in those days.

What kind of place would be accused of luring married men to folly and infidelity?

And why did it need a secret entrance from James Street, through an otherwise unassuming garage, the Modern Service Station?

And who was the enigmatic Josie?

Hmmm… some kind of mystery here if you ask me. Perhaps this will be worth exploring over the next few days.

On a heritage note, it is entirely possible that this building still exists hidden inside the Wilson Parking building. I’ll try to check it out at some point when I’m in the City.