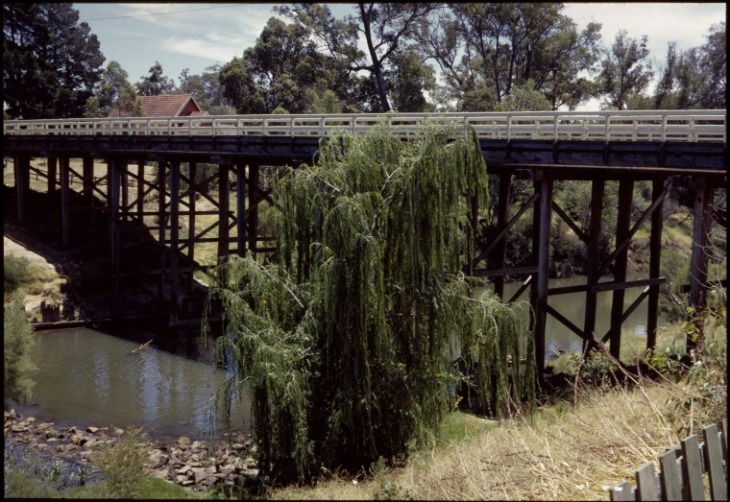 Just don’t ask what lies below

If you’ve ever gone on holiday via the South Western Highway, you have driven over the last resting place of Pinjarra’s earliest settlers.

According to Tobe Hooper’s 1982 documentary, Poltergeist, it is very dangerous to build on top of graveyards without moving the bodies first. And yet this is exactly what Main Roads did in 1954.

There have been a number of bridges crossing the Murray at Pinjarra, of which the 1897 one was falling down some fifty years later. It had been designed for the horse and buggy era and couldn’t cope with modern transport.

Many of the piles had rotted and engineers were amazed the whole thing had not collapsed. Although when it swayed alarmingly as stringers were removed, the workmen had to scurry to safety.

The new bridge (which is still there) was also timber, and overshadows the tiny church of St John next door.

Here many of Pinjarra’s white pioneers lay buried. But to make way for the new bridge, Main Roads needed a portion of the churchyard.

Presumably to save money, they simply dug up the gravestones, rested them against the church and built a new road over the top of the graves.

Is that really how we treat the deceased in Western Australia?

There were certainly local signs this was not a good idea. An earlier bridge over the Murray had been haunted in the 1870s by the spirit of a local lady, known to us only as Aunt C.

For the sake of our flaxen-haired little girls, please Main Roads do something before They’re Heeeere for good. 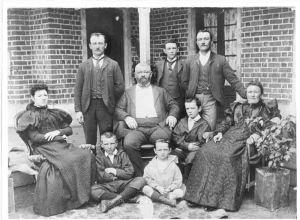 Edward McLarty and family at Edenvale, 1900

Are you ever too old to carry on with married women? This is the question we at Dodgy Perth will consider today.

In 1912, Reuben Green sued Edward McLarty for failing to make good on a £500 promissory note. So far, so straightforward.

Reuben was a labourer and mailman in Pinjarra, while Edward basically ruled the town like a medieval squire. He was JP and MLC, owned the biggest house (which you can still visit today), and was the father of a future Premier.

So perhaps it looks like Reuben was brave suing such a bigwig.

No, not brave. Stupid, as it turns out.

At this point, let us introduce Mrs Jessie Green, Reuben’s wife. Well, technically not wife, since Jessie wasn’t sure if her previous husband was alive or dead. But she called herself Mrs Green anyway.

Jessie was a middle aged, homely-looking matron, who was nearly as deaf as a post. But somehow she had caught the eye of the local squire, and whenever she beckoned Edward would rush to her bed.

Perhaps Edward wasn’t getting any at home from his missus, Mary Jane. Perhaps he just fancied bonking the local peasantry, like any good landholder. But since he was in his mid-sixties, he might have known better.

It should really have come as no surprise that one day Reuben should burst into the bedroom, and declare his outrage at finding the couple in flagrante delicto.

He levelled a rifle at Edward’s head, and demanded four promissory notes for £500 each or he would shoot.

Mr McLarty pleaded not to be blackmailed, but Reuben repeated his threat to fire. In the end, he received two such notes and allowed Edward to escape.

Despite it being very clear that Mr and Mrs Green were in on this together, Edward kept coming round for nookie. And kept getting blackmailed.

In the end he had coughed up around £2,000 before he refused to honour one more note.

Then Reuben had the balls to sue in the Supreme Court to get a last five hundred out of his victim. Unbelievable.

The judge found for Edward, saying he had certainly been an old fool, but did not deserve to be blackmailed.

While it might have been good advice just to leave forbidden fruit alone, we at Dodgy Perth feel somewhat sorry for Edward McLarty. After all, that’s a hell of a lot of money for a little afternoon delight.