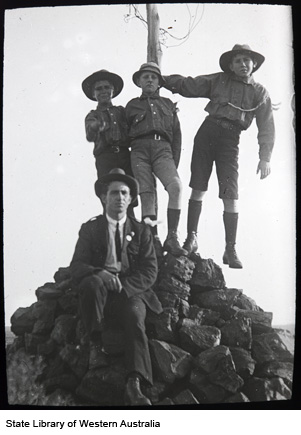 Today’s topic is a sensitive one we have touched on before. How can we stop young men from self-abuse? By which we mean spanking the monkey. This was one of the great panics of the 1910s and, perhaps surprisingly, the Scout movement was called to be at the forefront of the war on self-pleasure. But first, a little background.

If you’ve seen Dr Strangelove, you may recall General Ripper ranting about the importance of “precious bodily fluids”. This is a reference to the theory that unused semen has to be reabsorbed back into the body in order to build a manly man.

Any boy who wastes this precious bodily fluid will be giving away his future manhood, and will at best be effeminate, and at worst a homosexual. This was all proved by science. Apparently.

Most importantly, the future of the white race depended on having sufficient masculine men to build empires, fight wars, and the rest. So it was down to the scouting movement to conserve as much semen as possible.

Each Scoutmaster was commanded to tell their charges that under no circumstances whatever must they play or meddle with their sexual organs. Besides being sinful, it was contrary to common sense and the boys’ future interests.

The best instructions to Scoutmasters was to

push prudery on one side, and to take their boys in hand…

That’s actually what it said.

If the Scouting movement could succeed in imparting this vital information it will have saved the country and secured the future of the white race.

Who knew it could be so easy?

Some snotty-nosed brat in Sydney imagined he could stir up his teachers by writing ISIS R COMING ISIS on his school wall. How important he must feel, now that his infantile prank has hit national headlines.

We at Dodgy Perth naturally deplore his horrendous action. Like the words ‘government’, ‘committee’ and ‘team’, ISIS is a collective and therefore takes the third-person singular form of a verb. The correct graffiti is, therefore, ISIS IS COMING ISIS. Now write that out 100 times before dawn.

Which vaguely reminds us of this for some reason:

Anyway, Dodgy Perth would like to take this opportunity to expose the evil radicalisation that went on in our Perth schools. We refer, of course, to the Scouting movement.

Scouts. Seems all very innocent, doesn’t it? Sitting around a camp fire with a marshmallow on a stick and singing Ging Gang Gooley. But it wasn’t like that a hundred years ago.

In 1915, the Scout movement boasted it was bringing up a generation of boys who were well-drilled, healthy through rigorous training, and “well-disciplined and taught to obey”.

The Western Australian Governor repeated this to the young scouts themselves, reminding them that they should cultivate their intelligence, train their bodies, and to learn the value of “discipline and obedience to command”.

Founder of the Scouts, Baden Powell, recommended that every Australian boy aged between 11 and 14 needed to be prepared for a life to be spent fighting the Chinese and the Japanese invasion. His movement was the ideal place to place to instil self-restraint (read: no playing with your genitals), military training and sense of duty.

The problem, said Baden Powell, was that Australian youth were spirited and self-reliant, so action was needed now otherwise there was a risk of bringing up a nation of boys able to think for themselves. And these kids would not make obedient soldiers come the inevitable Asian invasion.

Dodgy Perth would also like to remind readers that during the Nuremburg Trials, the creator of the Hitler Youth, Baldur von Schirach, boasted that all of his ideas came straight from the Scouting movement. And it’s not hard to see this was true.

So before we get too excited about radicalisation, let’s remember that someone has always tried to mould kids into their image. And kids, being kids, have always ignored them.