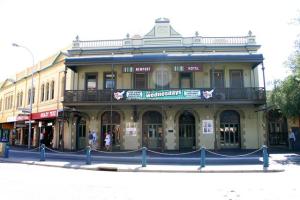 So if you were gay in 1901, where could you meet other people on the scene?

Turns out the answer is a billiard room in a Fremantle hotel. Dodgy Perth strongly suspects that it was the Newport, then known as the Club Hotel. (Check out the Newport’s Thursday music nights. Coming up next week is Boom Bap Pow as the Divinyls. Which Dodgy Perth is definitely not going to miss.)

Some of WA’s finest citizens were known to go to this billiard room. The kind of elite who could afford the finest clothes, diamond rings, gold watches, and “even eye-glasses”.

It seems that the landlord of the Newport simply let out the room, and turned a blind eye to whatever went on. The local policemen were slipped a few pound notes every now and again and, strange to say, never saw a need to investigate the billiard room’s clientele.

It is even suggested that at least one police inspector and a local magistrate liked to play billiards from time to time.

In fact, had you attended before midnight, all you would have seen were some respectable citizens enjoying a game or two, while sipping a few beers.

But, come midnight, if you were a stranger and seemed likely to be gay, you would have been asked to stay on for “a little game on the quiet.”

After this, we cannot say for certain what occurred, but it must have been good because The Sunday Times described it as a “carrion filth heap of depravity”, a “foul Fremantle sensual stew”, and a “den of disgusting depravity”. Which sounds like a great night out.

So, when Dodgy Perth is at the Newport next Thursday, we will raise a glass (or two) to a generation whose love might not be able to speak its name, but could still find time for a game of after-midnight billiards.