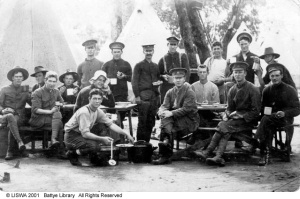 Basic training for World War I took place at Blackboy Hill, a couple of kilometres east of Midland town centre. The YMCA won the contract to provide the canteen at the camp.

Trouble is, none of the enlisted men liked the way The Y ran the place. Instead of providing a service at a reasonable price, the canteen was basically run to raise money for the YMCA. The manager of the canteen was vastly overpaid, and they even had the nerve to charge rent to anyone on site wanting to use the canteen for a meeting. The building had been built by the Army!

All in all, the men serving their nation felt completely ripped off.

The officers weren’t happy about this situation, so on Monday 28 September 1914, a rival ‘wet’ canteen was opened in a tent at Blackboy Hill.

This would be good for morale, said the officers. It will keep the men on site and away from the local pubs. In any case, it would let the officers know how much the men were drinking, and restrict them to beer rather than spirits.

A welcome improvement to the training camp. No one could possibly object to this.

Naturally some pasty-faced wowser, the Mike Daube of his day, took to the letters page to rail against this threat to civilisation. Having a beer would turn soldiers to cowards, he screamed. They would become tired, be unable to shoot. Every military virtue would be wiped out as soon as a glass was poured.

Perhaps it had not been wise for the officers to have seized one of the YMCA’s tents for the new canteen.

The Y retaliated to this insult (and to the end to their monopoly) by requesting that the camp commandant ban the consumption of beer at Blackboy Hill. He rightly told them to get stuffed.

But the YMCA were not to be put off. They drafted an urgent telegram to the federal Minister for Defence, explaining that the “young soldiers of this State” needed protection from the awful officers at the camp. And their “social work” was becoming more difficult, since no one wanted to eat at the old canteen anymore.

At 2 o’clock in the afternoon, on Sunday 4 October, orders came in from high command. The wet canteen was to be closed.

It had survived less than a week.

This is an edited re-post of an earlier article. But we like it, so are sharing it again with our new followers.