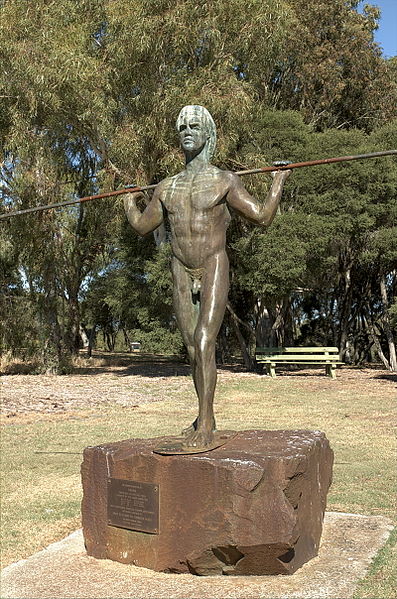 Statue of Yagan on Ma’tagarup

As Heirisson Island looks increasingly likely to become a sculpture park, Dodgy Perth takes a look at the time it almost became a sports complex.

But we at Dodgy Perth have no particular love for François-Antoine Boniface Heirisson, who left us nothing but his name, so prefer a much older designation: Ma’tagarup.

In 1950 the State Government gifted Ma’tagarup to the National Fitness Council, so the island could be turned into a sports complex.

Before sculpture parks, there was sport

However, Perth residents were outraged. Not because they didn’t want more sport, but they had always hoped Ma’tagarup would be turned into a nature reserve for Sunday picnics.

There was more controversy when it was announced that Heirisson Island was to be renamed Causeway Island. Just think of the damage to our State’s history, said the Historical Society. Completely forgetting the name Heirisson erased an entire culture’s past.

Ma’tagarup was to become a “playground”, fretted the newspapers, who worried that alcohol would be served during sporting events.

Planning progressed, and various sporting bodies became quite excited about having an island home. The island was levelled and various government announcements told of a wonderful future for sport in Western Australia.

More than two years into the project, the whole scheme was suddenly dropped. No one had given a thought to how traffic would get on and off the island and, in any case, the reclaimed land didn’t even allow for construction. Bulldozers would just sink into the ground.

So that was the end of the redevelopment of the sacred island of Ma’tagarup. Until now. When people want to turn it into a sculpture park for Sunday picnics.