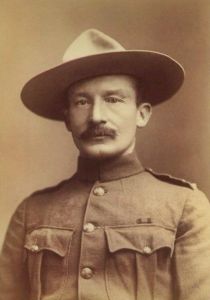 In 1912 Lt Gen Sir Robert Baden-Powell, founder of the Boy Scout movement, was being entertained by the Mayor of Perth, Tommy Molloy, in the Town Hall on Barrack Street.

After his praise had been sung by the assembled dignitaries, BP himself rose to speak.

His message was uncompromising: the Asiatic Menace was at Perth’s shore, and every available hand would be needed to fight them.

BP announced that he knew what he was talking about because he had been to China. While there were a handful of civilised Asians, the vast majority—there were millions of them, he warned—were still savages.

Any day now, these savages would rise up and seek colonies overseas. Especially Western Australia. And with an army of uncivilised men who would stop at nothing, it would be hard to resist.

He was good then, said BP, that Australians were already preparing to defend their homes from the coming invasion.

However, this alone would not be enough.

The whole point of being a Scout, said the founder of the movement, was to give self-discipline to a boy, make him realise his sense of duty, and to make it easier to turn him into a soldier when the Asians came calling.

So next time you see all those innocent-looking Cub Scouts, just remember: they’re a paramilitary force intended to save us from the malevolent Chinese and Japanese.

If they’re our best line of defence, we’re probably stuffed.