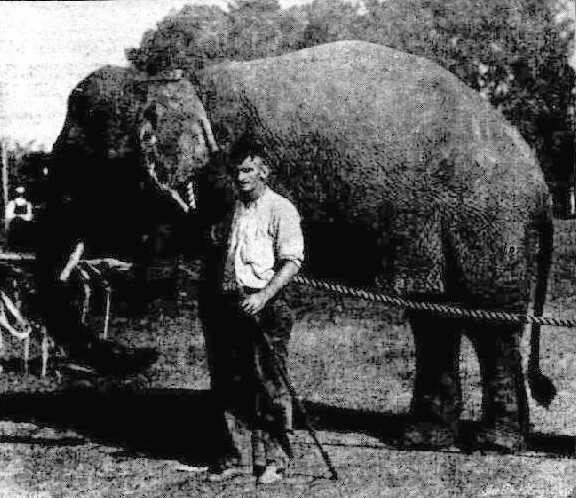 Hello children. Are you sitting comfortably? Today we will tell the story of Jumboroo the racist elephant.

Mr Le Souef was sad. He owned a zoo. But he did not own an elephant. “What use was a zoo without an elephant?” thought Mr Le Souef.

Mr Le Souef had a Government friend called Happy Jack Scaddan. In 1922 Happy Jack was visiting Kuala Lumpur. He saw they had lots of elephants. So he asked if Perth Zoo could have one.

The nice people in Kuala Lumpur said yes. They promised to send an elephant to Happy Jack as soon as possible. So little Jumboroo was caught and placed on-board a ship bound for Fremantle.

On they way, Jumboroo fell through a hatch on the deck and tumbled six metres into the cargo below. What a naughty elephant. After that he was held in tight chains for the rest of the journey. Don’t you think he deserved it, children?

When he arrived at Robb’s Jetty, Jumboroo was scared of the big crowd there. He tried to get away. The people said he was a very naughty elephant indeed.

Jumboroo was even more frightened when they used a crane to lift him onto a small ferry to take him to South Perth. He made lots of noise. The people said the elephant must be very wicked to be so noisy.

When they finally dragged Jumboroo into the zoo, he did not want to go. The naughty little elephant was terrified of the roaring tigers. So Mr Le Souef said he would keep the mischievous elephant in chains since he was not behaving himself.

All the children came to see Jumboroo at Mr Le Souef’s lovely zoo. But the naughty elephant did not like it at the zoo, and he would not play with the lovely children.

The zoo people decided Jumboroo was racist, and only liked black people from his home country.* And you can’t have a racist animal in Perth Zoo. Can you, children?

And the naughty racist elephant went off to start his new life in the Eastern States as part of the circus entertainment. We are sure he must have been very happy in the circus. Everyone loves circuses, don’t they?

* Actually they did not say “black people”. They said another word Dodgy Perth cannot use, even if Kanye West can.