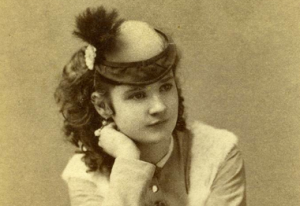 If you’ve not been keeping up, the story so far:

Henry Whittall Venn is a pompous oaf, and WA Commissioner of Railways, who has fallen in love with a young married actress, Eve. She doesn’t seem particularly keen on the old bugger, but who knows what might happen?

Venn has had Eve’s husband arrested on a trumped-up charge, so he can send a love letter, which he is convinced will forever win over his intended. Never mind that Venn also has a wife.

It is getting late in the evening, and Venn is coming towards the end of his letter.

Eve was travelling to Melbourne on the troopship Orient—the Boer War was still raging—and Venn was concerned she might mix with soldiers. He warned her that, as a man of the world, he understood these men, and she should not fall for their fake charms or she would suffer as a consequence.

Although inexperienced at courtship, Venn was no fool. He instructed her that letters were to be sent to the Weld Club, not his home or office. If they were sent to his home, his wife would find them; at the office, his secretary.

The letter repeatedly assured Eve that the stiff, pompous git she had met at the party was dead, and now he was but a man “who looked now and then into a pair of brown eyes and thought the frogs were having a good time of it, because they would sing on, and be near you while I was far away.”

Suddenly, Venn became anxious. Why was Eve keeping her Melbourne address from him? Was she just being careful? Or was she being untrue before their relationship had started?

No… he must not think like that. Instead, he decided to praise her brief note to him, describing it as being like “the fragrance of the roses.” What a charmer the old man was turning out to be.

With a final warning—Please destroy this letter after you have read it—Venn went to bed, ready to post the note in the morning.