Visitors to the 1938 Perth Royal Show could expect, as ever, to be both fascinated and repelled by the human freaks on offer in the sideshows.

That year the ‘freaks’ included Mexican Rose, an (unsurprisingly) Mexican lady, alleged to weigh 64 stone (400 kg). According to press reports, Rose had to be lifted off the boat by a crane on arrival in Australia.

Another exhibit was Jang, a 10-year-old from Borneo, who had been collected by jungle explorer and lion hunter Dave Meekin, who made a living out of gathering human curiosities for Royal Shows. Jang was said to have a tail.

Miss Betty Broadbent was a tattooed girl, with ink from her neck to her ankles. She boasted of having 465 designs, including the biggest single piece ever tattooed on anyone on her back: a copy of ‘Madonna and Child’. Her arms and legs were covered with gypsies, Chinese pirates, and across her throat were American eagles surmounting the American flag.

But none of these freaks were as important as the star attraction of sideshows, the ‘half-and-half’. Or hermaphrodite, as we might say today.

In 1938, the dubious honour of being the most sought after freak at the Royal Show was Anna-John Budd. A Canadian, Anna-John had been registered at birth as a girl, went to a girls’ school and it was never suspected she was anything but a girl.

When she was about fourteen her right side increased in size and bone structure, and hair began to grow only on the right side of her body. About the same time she was overcome with a desire to take part in men’s sports, rather than woman’s.

And now as a fully grown person, her left side was purely female, and her right side purely male. If there were any doubters, the public was offered the opportunity to intimately examine Anna-John to prove that this was a genuine medical wonder.

Perth’s police, however, were not so keen on allowing the general public to undertake such examinations, despite Anna-John’s protests that s/he had “always made it a practice to permit nothing indecent to be associated with the act” and that there was “much worse exposure on beaches of Sydney and Brisbane.”

It was also possible, if you desired, to buy postcards of Anna John for (ahem) private enjoyment in the privacy of your own home. 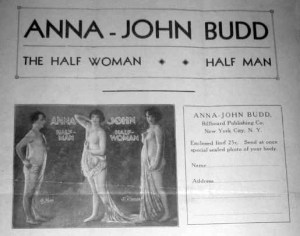 Today, the most probable explanation for Anna-John’s condition is that he was born a man, took hormones to promote breast growth and shaved the left half of his body. Combined with a specially designed dress and appropriate make-up, this would look convincing to the gawking paying customers.

Even so, it makes the current displays at the Royal Show seem very tame by comparison.