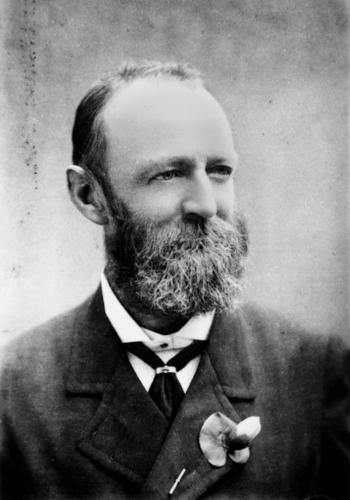 Today we would like to introduce you to the two faces of explorer and pastoralist Frank Hann. First up is the face you get if you read the, normally reliable, Australian Dictionary of Biography. To our regret, the article was written by one of our favourite local historians.

In the ADB you will read about his amazing feats of “bushmanship and endurance” and how he traversed into one of the most difficult areas in Australia which was “peopled by unwelcoming Aboriginals”.

Un-fucking-welcoming? You’d probably not welcome someone who decided to steal 2,590 sq km of your country either. But you won’t find that in the ADB, for there is not a single criticism of this great hero in the article. To discover more you have to keep scrolling down to the ‘Additional Resources’ section.

Readers are advised that the following contains a scene which may be distressing, particularly to Aboriginal people.

In 1909 Hann boasted of his exploits in shooting at some Aborigines who were resisting the invasion of their land:

Had I shot the black with a red band I would have cut his head off and sent his skull to Mr. F. Brockman, of Perth, who asked me to send him one, as a friend of his in London wanted one. I was very sorry that I could not send him four, but later on I got him a splendid one.

WTF? Hann is proud he decapitated an Aboriginal warrior and sent his head back to Perth. And it was gratefully received by Frederick Drake-Brockman.

Such boasting might have played well with Hann’s mates in the Kimberley, but it was too much for the residents of Perth. The Aborigines Department demanded a police investigation, and the Premier announced that Hann was to no longer be paid by the Government.

The Anglican Bishop, Charles Riley, was outraged as well. He demanded a full inquiry, for which Hann vowed never to speak to the bishop again.

But then Hann tried to back down, claiming anything and everything to take the heat off. He’d been joking, he’d acted in self-defence, he loved Aborigines and would never hurt any of them.

Various friends also came to his aid, claiming he was man who really liked Aboriginal people, and it had all been just a campfire yarn really.

And what of Frederick Drake-Brockman? He rapidly wrote to the media and was forced to admit he had received a skull, which he had posted to England “for scientific purposes”. After all, it was difficult to get hold of Aboriginal body parts where the dead person’s blood hadn’t been mixed with other races.

But, he said, it didn’t look fresh to him. It was probably an “old man, dead some years.” Oh. Well that’s all okay then. And guess whether you’ll find any mention of Fred’s collecting habits in his ADB entry? Did you guess right?

From this distance it does appear probable (but not certain) that Hann did not actually murder anyone for their skull, but that is not our key point here. We want to draw attention to the whitewashing of WA ‘heroes’, whose real natures remain buried under romantic talk of bushmanship and exploration.