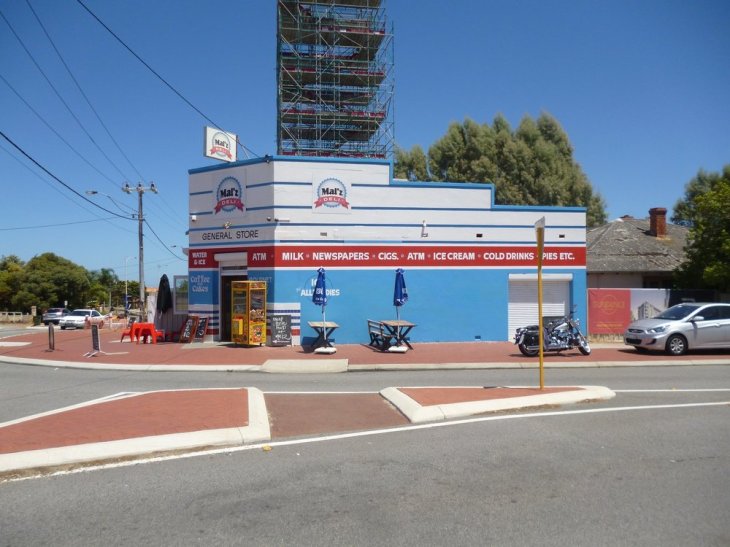 Ours are all skinny flat whites

You may have seen in the media about the poor deli owners in Scarborough who have been forced into a rooftop protest to save their business. It is due to be knocked down at some point to make way for yet more high-rise apartments. Read all about it here.

Once you could find these corner shops everywhere, but in an age of late-night supermarkets and 24-hour garages they are becoming increasingly rare. This Scarborough deli was built around 1940 and was thought of as a very modern shop for its time. After World War II, the owners added an asbestos residence next door with lounge, two bedrooms, kitchen, bathroom, laundry, garage and (of course) yet more asbestos for a roof.

Looking at a historic photo, the building has remained much the same as when it was built, except for the inevitable loss of its cantilevered verandah. The shopfront windows are particularly interesting, because they seem to be identical to the original (or may even be original!).

Is this enough to make a building a heritage place? This Scarborough deli is not, by any stretch, a fascinating building. In fact, it’s quite ordinary as a corner shop. But that might be exactly what makes it have heritage value. It is typical of its era, typical of its type, and could probably tell a thousand stories of its owners and customers.

And delis were often run by New Australians and women, and New Australian women for all we know. Do we have enough heritage places where we can tell their stories? Could a real-life and still open deli not be a great place to have heritage and a coffee at the same time.

If you feel like trying to save it, give the State Heritage Office a call on 6552 4000 and say you’d like to nominate the deli on the corner of Brighton Road and Hastings Street in Scarborough. They’ll make you fill out a form (it is a government department, after all), but it’s not difficult to do. And then at least we’ll know if this place is worth saving.