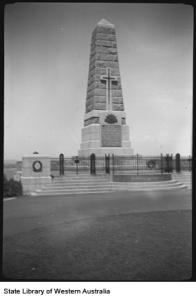 It will be a memorial all right, but it isn’t a design—there is no design in it.

Estate agents will tell you that three things make a property great: location, location, and location. There’s no denying that the WA State War Memorial has all three.

What it lacks, though, is any sense of scale, dignity, or architectural style. Transplant it from its sublime location to your local park and the SWM would look like the council put it up on the cheap.

How was it that the brave men who fought, and often died, for their young nation ended up being commemorated with a Red Dot bargain-basement memorial?

Let Dodgy Perth take you through another tour of Western Australian history.

END_OF_DOCUMENT_TOKEN_TO_BE_REPLACED

What is there wicked about a glass of good beer?

Today is the centenary of the AIF’s departure from Albany.

Strangely, for all the media coverage, and expense, it is not often mentioned that this party has little to do with West Australians. Our boys departed through Fremantle, not Albany, and there seems little money to be spent on recognising WA’s role in WWI.

So we thought that Dodgy Perth should get in on the heritage juggernaut and offer up our own slant on the Great War.

The canteen was provided by the YMCA. This proved controversial, with the YMCA accused of operating the mess as a profit-making concern, overpaying its manager, charging rent to the canteen for use of a government erected building, and generally ripping off the enlisted men.

So, on Monday 28 September 1914, the officers opened a ‘wet’ canteen in a tent at Blackboy Hill. They believed that this would be good for morale, keep the men away from the local pubs and at camp, and limit alcohol consumption to beer rather than spirits.

All in all, you would think, an improvement to the training camp to which no one in their right mind could object. However, this was Western Australia.