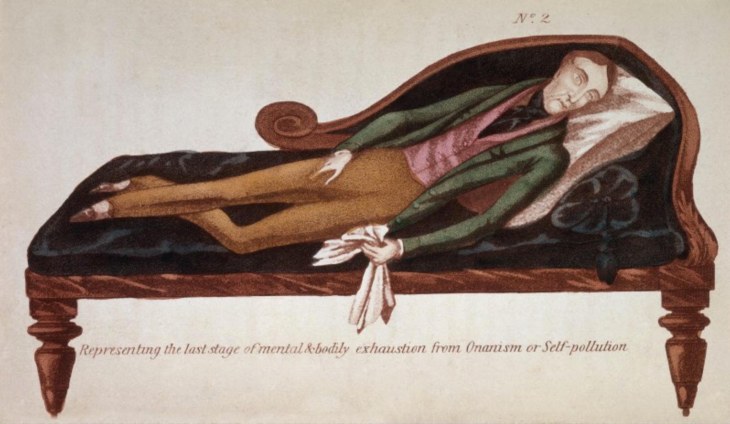 The effects of onanism on the body

Parents have two main fears about their children. One is they might be molested by a stranger. The other is that they might touch their own genitals.

Of these, every parent will understand, the second is by far the worse. And the good parent will do everything in their power to stop it happening.

Dodgy Perth has been reading parenting advice from 1917. And we have come to the realisation that we did not bring up the Dodgy offspring correctly.

First of all, the statistics. 150 Perth boys aged around fourteen were interviewed as to whether or not they had abused themselves. 60% confessed they had indeed spanked the monkey at least once. However, scientists suspected the figure could be at least nine out of every ten.

Nearly every fourteen year old boy had been exposed to pornography, and all except two of them knew where their local brothel was to be found.

So what can we do to stop this outbreak of compulsive onanism?

Firstly, every parent should read the recommended book, Toward Racial Health. Already done that? Good, then we’ll go on.

Parents should not be shocked if their child confesses they have chocked the chicken. If they have, of course, it is entirely the fault of the parent for not having intervened earlier.

For example, if a boy of fourteen is innocent of the crime he will have no problems with his mother being in the bathroom while he showers.

But what should we do if our child has already buffed the banana?

Well do not rush to the doctor immediately. That can come later. Instead make sure he sleeps with his hands outside the sheets, and not on his back. If he feels the temptation coming on, he must have a cold shower. (You knew that one was going to be in there didn’t you?)

Encourage him to sleep on the verandah, and don’t dress him in thick pyjamas. Night clothes should be as thin as possible to prevent overheating.

If he still shows tendencies to fish with the trouser trout, cut down on the meat and never ever feed him pork.

In conclusion, don’t shirk your responsibility by handing your boy some book on ‘what a boy ought to know.’ Talk to him yourself. You will find it quite easy once the ‘ice is broken.’

And that’s not a euphemism.