Today Dodgy Perth takes a slight detour from our usual preoccupation with sex and scandal. Instead we wish to celebrate an Aboriginal hero of the early colony.

On 8 March 1833, with white settlement only a few years old, Josephine Birkett was granted Perth Lot A12 by James ‘I like young brides’ Stirling. This attractive piece of land was on St George’s Terrace, exactly where the hideous London Court now sits.

She had already built herself a bungalow on the site (planning laws were somewhat different then), along with a few neighbours, including Charles Leroux.

All the cottages were constructed with roofs made of reeds and rushes. So it is no surprise that locals fretted about what would happen if they caught fire. And why weren’t the roofs supported properly? You can imagine that the owners dismissed such concerns with a wave of their hand. Nothing will happen, they would have said.

On 13 March 1833, just five days after taking legal ownership of the land, Josephine Birkett’s bungalow caught fire. Josephine had a narrow escape, the flames reaching the bed on which she was sleeping before she was aware of her perilous situation.

She and her daughter were unable to grab their treasured possessions, escaping only with the clothes on their back.

The fire quickly spread to the adjoining cottages, including that of Charles Leroux. A bugle was sounded and people ran to the scene to offer assistance. Among those who attended were Captain Ellis and renowned Aboriginal resistance leader, Yagan.

Yagan was keen to offer assistance, but knew exactly how white men thought under these circumstances. He went up to Ellis and asked him to tell him straight if white folk or black folk were going to be held responsible for the destruction. Ellis replied that as far as he knew it was an accident.

This was all Yagan needed, and he took charge, encouraging the colonists to work harder and bringing bucket after bucket of water himself. His cries of “mocha, mocha” stimulated the townsfolk to do their best.

But, despite these heroic efforts, as the smoke cleared, many of the cottages and all of their contents were completely destroyed.

Despite Captain Ellis’ words to Yagan, immediate suspicion fell on the local Aboriginal population. However, with no evidence the mob decided that it was probably a local boy who had recently been punished for some minor crime. But, again, no proof was forthcoming.

Eventually, Josephine’s servant said that, although it probably had nothing to do with her, she did remember throwing the glowing embers from a grate in the exact spot the fire started.

One happy outcome was that Private Jefferies, of the 63rd Regiment, was poking through the ruins when he discovered Josephine’s moneybox. He immediately returned it to her, earning praise for his honesty.

We wish all the ends to this story were happy, but suspect the reader already knows they are not.

Yagan was murdered by a young settler just a few months later, after the government issued a bounty for his capture ‘dead or alive’.

Captain Ellis was to be killed by an Aboriginal warrior the following year, as he fought at the Pinjarra Massacre.

Life was often bloody and short in the 1830s. Let’s not whitewash it with sentimental views of early colonists and their pretty cottages. 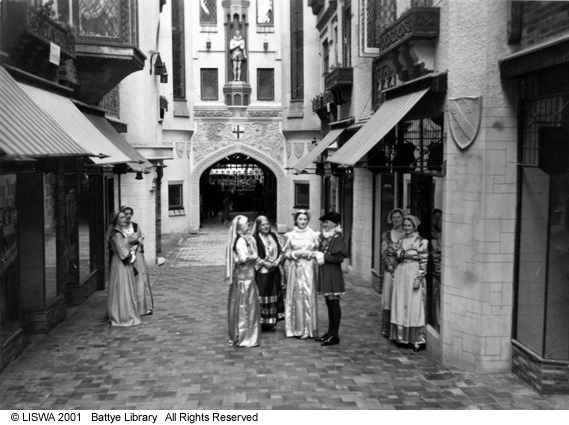 If asked to list Perth’s ten worst buildings, this office would definitely include London Court. A cut-price Disneyland Tudor street scene, it was erected in 1937 by shady miner, Claude de Bernales.

How bad does a building have to be to get condemned from the pulpit? Rev Iona Williams described it as so ugly, London Court was an offence against God Himself. Preaching at Trinity Congregational Church, the good reverend said the arcade was a admission that architects had no original ideas. Architecture should be about the now, not a repetition of the past.

But what would a theologian know? Let’s get the opinion of an architect. A poor imitation of Tudor architecture, the architect spluttered, before lashing out at the ridiculous Punch and Judy clock. When archaeologists of the future excavate the arcade, he said, they will be baffled as to why it was erected in the first place. In any case, a good archaeologist would immediately rebury the monstrosity.

Warming to his theme, the architect demanded to know where it would all end? A Leaning Tower of Pisa outside the GPO? Stonehenge on the Esplanade?

In a blistering conclusion, he said the only thing that should be doing impressions is a monkey. And a monkey would probably have made a better job of the London Court anyway.

As you can see, London Court has been much loved ever since it was erected.

If he’s remembered at all, Claude de Bernales is famous for having built the gaudy mock-Tudor shopping arcade, London Court. Described as a “mining promoter and investor”, he is also said to have been “larger than life”.

Those who lost their savings in his fraudulent schemes would have called him a con man.

Flashy and egotistical, de Bernales was the one of the biggest personalities ever to set foot in Perth. But he gambled on gold in a big way—and lost. Lost other people’s money, that is.

In his youth, de Bernales was well-known on the goldfields. Traveling the dusty fields on a push-bike, he would arrive at a mine, and put on a spotless shirt and collar before presenting himself to the manager to sell his machinery.

Before World War I he bought up as many derelict mines as he could. Some were flooded, few were workable. After the war, de Bernales created a labyrinth of interlocking companies, and floated his mines on reports of old workings.

Only one mine, Yellowdine, ever paid dividends, but even that failed to live up to its promise. In a classic Ponzi scheme, interest in his numerous companies was kept alive by dividends drawn from Yellowdine.

At his peak, de Bernales’ office was adorned with Flemish tapestries, African mahogany paneling, and a luxury bathroom lined with marble. Visitors were offered the best cigars and liquors.

However, in 1939 eight of his companies were barred on the London Stock Exchange. He faced many stormy shareholder meetings, where he indignantly denied allegations of fraud. But when Scotland Yard sent two detectives in 1946 to Australia to investigate, the whole rotten scheme came to a sudden end.

A man who built an empire entirely made of smoke and mirrors also built London Court. What a surprise.