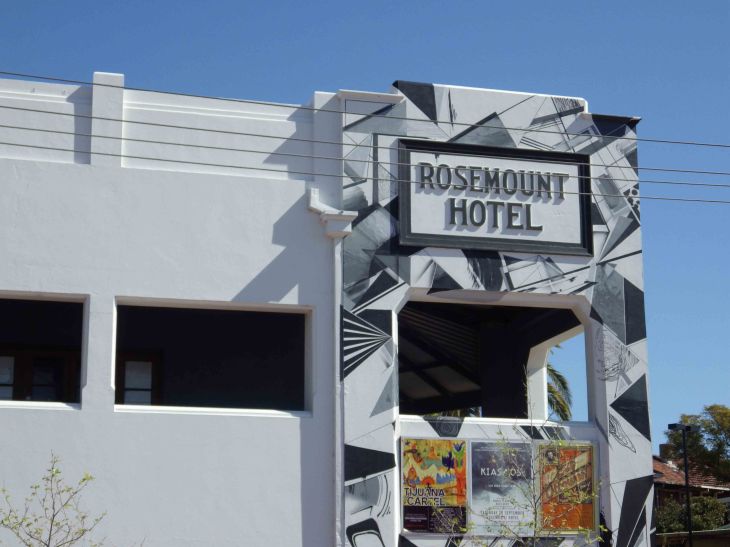 Anyone want to go see a band with us?

The Rosemount Hotel is the work of Charles Oldham, best known for designing the magnificent AMP Building. It was during the construction of this he wrote a letter to his clients. AMP, saying the Clerk of Works had to be fired.

Oldham claimed Robert Bushby was too picky with the materials (he didn’t like the Donnybrook stone which had been delivered) and the contractors couldn’t work with him. Bushby was dismissed and immediately sued Oldham for libel. He originally won £200 in damages, although this was overturned on appeal, since the letter was deemed to be in confidence.

William Cutmore, licensee of the Rosemount Hotel, ended up in court in 1910, accused of selling potato spirits masquerading as good, honest rum. Cutmore had purchased five gallons of the stuff, and only sold one shot, before the Chief Inspector of Liquors showed up at his premises. The inspector picked up a bottle, put it to his nose, and announced, “I don’t like the odour of this stuff.”

In the lab, the spirit in question was found to be made from potato, coloured with burnt sugar, and flavoured with some type of rum essence. The ingredients of the latter included manganese dioxide and sulphuric acid, to which, birch or coconut oil had been added.

The government scientist refused to tell the court if the ‘rum’ was injurious to health, protesting “I am not a duly-qualified medical man.” But, he added, “I have my own opinion on the subject.”

Cutmore’s defence managed to establish he was an innocent victim here, but he was fined £20 anyway. In the meantime, the newspapers fretted that if too much dodgy rum hit the market, WA’s percentage of ‘lunatics’ was bound to increase by leaps and bounds.